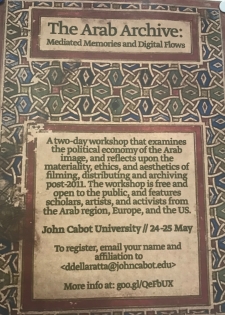 “The Arab Archive: Mediated Memories and Digital Flows,”  which took place over the past two days at John Cabot University in Rome, was advertised as  an examination of “the political economy of the Arab Image” which “reflects upon the materiality, ethics, and aesthetics of filming, distributing and archiving post-2011.”  The workshop more than lived up to this ambitious description, with discussions ranging from debates on privacy and the ethics of sharing violent images to how archives can be more than repositories.

Introducing the workshop’s first panel, Donatella Della Ratta laid the ground for the discussion more broadly, raising questions not only about what happens to revolutionary images afterwards, but also,  highlighting an issue that would be returned to throughout the workshop, how most of the image makers have no ownership over these images, and how the proliferation of these images is connected to a sense of loss of influence over the event.

The first speaker, Philip Rizk, spoke about  the work of Mosireen and the debates that took place in setting up the 858 archive, including the tensions between those who wanted a national focus and those who resisted this. A point that was stressed was the danger of an archive that perpetuates a reductive visual narrative of the revolution, focused on upper middle class activities — this was also a topic in Rizk’s essay “2011 is not 1968: An open letter to an onlooker on the Day of Rage” in which he traces how “we became the translators of a collective uprising we were far from representative of.” Mentioning what he called an over celebration of the archive as an objective and authoritative source,  Rizk also discussed the possibilities of archiving fictional narratives which do not seek to “document” reality in the same way.
Basma Al-Sharif‘s paper on violent images in the context of Palestine picked up on the question of how archived images of violence can be used and reinterpreted beyond their original framework. Speaking from her own experience as a Palestinian raised mostly in the west, Al-Sharif discussed the accumulation of images which became icons of suffering at various stages of the conflict.

Beginning with the story of Huda Ghalia, Al-Sharif posed some questions about the impact of Palestinians recording their suffering in this way, and what value these self-produced images of suffering have, particularly given that they are constantly questioned as choreographed, acting or propaganda. When do these images become invasive? At what point does the social function of documenting the violence become something else?

This set off one of the most contentious debates throughout the workshop: the issue of when (or even whether) taking and showing violent images of injured and dead people is appropriate, and to what end these images are shown.

To me, al-Sharif’s talk captured the contradictions of how images can at the same time be almost unbearable in their power, leaving the viewers shaken and disturbed, and at the same time, work towards desensitising the violence inflicted on particular (non-white) people. And this can be internalised, this desensitisation. I still remember sharing and translating videos of violence and injuries and deaths during the Misrata bombing, and how all of us who were sharing these videos dealt very differently with one particular death in that same context, hesitating to share it openly, because this person happened to be a Western journalist (Tim Hetherington).

This issue came back during the discussion of the talk by Enrico de Angelis, of Free Press Unlimited & Syria Untold, who talked about the “impossible civil contract of photography” and the anonymous “orphan images” of the Syrian revolution.

Playing devil’s advocate during the Q&A after the talk, Donnatella asked whether there was an issue of class invovled in the resistance to using what de Angelis called “horror images,” stating that she was not aware of an opposition to taking and sharing such violent images among ordinary citizens in Syria. In fact, Al Jazeera had long been showing such images, even before the uprising. Perhaps, she suggested, this resistance was merely a projection from an elite perspective sensitive to privacy as a western, neoliberal construct?

Unsurprisingly, this was a contentious claim, but led to an interesting discussion on the dismissal of Arab “elites” as inauthentic and the ethics of the spectacle of violence.

Another of the speakers, Abed Takriti, then mentioned a Mahmoud Darwish line that captured much of this debate, and the idea of archiving violent images:

On the second day of the workshop, Miriyam Aouragh discussed the Moroccan uprisings both in 2011 and the way those protests have been taken up again and shifted more recently in the past couple of years. She focused in the last part of her presentation on Silya Ziani, and the shift in gender politics as women have taken a more active role.

Abed Takriti, talked about Learn Palestine as an anti-archive project, which was set up not in order to offer an authoritative collection, but instead an attempt to present a representative sample  in accessible ways, through an online course (the teach section) and a gallery (the learn section.)

Finally, Dork Zabunyan discussed slideshows of Arab revolutions, and the question of how to represent popular struggle w/o simplistic glorification. He commented positively on the “sober” strategies used by Abou Naddara in comparison to more rousing, celebratory images.  The final speaker was Ali Atassi, of Bidayyat, who spoke about the importance of differentiating between documentary and activist or amateur videos, critiquing the aestheticization of revolution videos as “imperfect cinema.”

What became apparent over these two intensive days was the impossibility of curating any post-2011 visual archive that would do justice to the wide-ranging contexts discussed. The singular in “The Arab Archive” and “The Arab Image” vanished as the speakers’ talks amounted to different perspectives on a plurality of attempts at archiving that could never be exhaustive, and the struggle to deal with an overwhelming proliferation of revolutionary images that do not necessarily help us to find coherent answers to the events depicted.