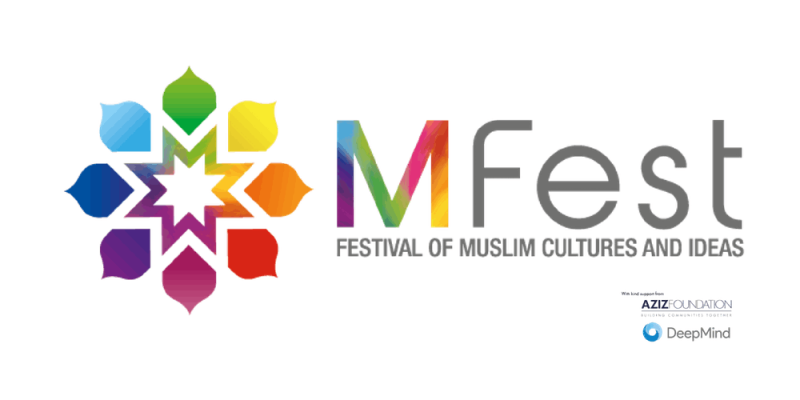 This weekend was MFest, “UK’s first festival of culture and ideas dedicated to Muslim communities,” which took place at the British Library between the 28th-29th April.

The programme included several panels relevant to this blog. I was particularly interested by the panel “Spicing Up Sci-fi: The Dunes Strike Back” featuring Emirati writer Noura Al-Noman, author of the young adult scif-fi novel Ajwan, as well as Soren Lind, who has co-directed a number of sci-fi inspired works related to Palestine with filmmaker and artist Larissa Sansour. The panel also included Nafeez Ahmed, author of Zero Point, which imagines a near future Britain on the point of collapse, and Naomi Foyle, author of The Gaia Chronicles, “an eco-science fantasy quartet set in a post-fossil fuel Mesopotamia.” The session was chaired by journalist and commentator Faisal Al-Yafai.

The panel more than lived up to expectations, and I am sure that those who may not have been aware of Noura Al-Noman are now die-hard fans. Towards the end, Al-Noman discussed her work translating Frank Herbert’s Dune into Arabic for the very first time, and her struggle to negotiate the inclusion of charged words such as shariah and jihad, which she noted may have been merely “exotic” words for Herbert but which have so many connotations and denotations when placed back into their original context. As she put it, rather wryly, “It is going to be very, very interesting.”

Another panel that caught my attention was “How to take back our stories,” where the panelists discussed how they work towards amplifying minority voices and encouraging more diversity in an often white-centric publishing scene. Panellists included:

The next day, I attended a number of panels including “How the Nakba Reveals Itself Today” which included Reem Kelani, the Palestinian singer and musicologist, writer and journalist Mustafa Abu Sneineh and Selma Dabbagh, British Palestinian novelist. The session was chaired by Dina Matar. Both Abu Sneineh and Dabbagh spoke thoughtfully of the role of literature in the Palestinian struggle, and the balance of writing in a way that is engaged and sensitive rather than brashly polemical about such a charged topic that does involve ongoing anger and sadness and trauma.

Kelani meanwhile talked about the importance of cultural resistance, about feeling that she was “in Palestine” in being amongst Palestinians, the need to push back agaisnt the Islamisation of Palestine which excludes Christian Palestinians. I was also very glad to hear her excoriate the Arab Left for their failure to maintain a moral compass regarding Syria from some misplaced sense of Palestinian commitment. All this, and the panel concluded with a fun impromptu rendition of Bay’a3 al-Tufah, The Apple Seller.

Having written about Dabbagh’s novel Out of It for a chapter in my phd thesis, I fangirled just a little bit on meeting her and she very kindly signed a copy of her novel for me.

The panel on “Women and Power: Islam and Evolving Feminisms” also appeared in the programme as “Muslim women and New Feminisms” — the words new and evolving, and the plural in feminism, was telling and reflected in the discussion. Early on, Myriam Francois dealt with the whys of feminism as a broad concept and its relevance for Muslim women simply by echoing Maya Angelou: “I’m a feminist. I’ve been a female for a long time now. It’d be stupid not to be on my side.” Hodan Yusuf, meanwhile, concluded the discussion by rejecting the idea feminism as a “western” label and stating that the label did not matter, it is the work that matters, and that work could be done by anyone, no matter how they dress.  Sabeena Akhtar, editor of upcoming Anthology, Cut From The Same Cloth, discussed the problems with the judgemental nature of some people in Muslim communities and the resistance to accusations of racism or misogyny even though both of these clearly exist in our societies today.

The session was  chaired by Remona Aly, who did a wonderful job keeping the conversation moving and deftly taking as many questions as possible.

The festival concluded with a session of “compressed comedy,” featuring ten minutes routines each by Omar Hamdi, Esther Manito, and playwright Hassan Abdulrazzak, who more than matched the comedians for laughs with his absurd piece about coordinating with ISIS to gain publicity for his upcoming play and ensure that it is “zeitgeisty” enough.

These three days were so jam-packed with events and discussions that it was seriously difficult to choose what to attend, and every one I attended was either thought-provoking, fun and inspiring, or all three. Great work by the organisers.