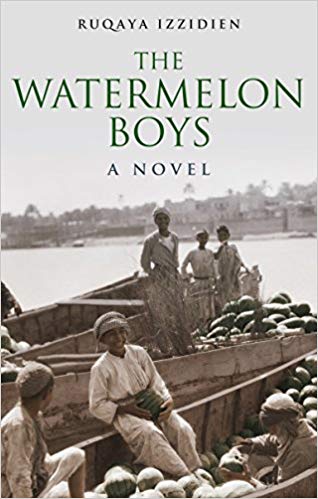 The Watermelon Boys is the debut novel of Iraqi-Welsh journalist Ruqaya Izzidien. Set between 1915 and 1920, the novel tells a first world war story with a difference: in this novel, the main protagonists, Ahmad and Carwyn, are Iraqi and Welsh.

The novel focuses most on the story of Ahmad and his family, though it spirals out to include a large cast of characters including a number of Ahmad’s friends and colleagues as well as his Jewish neighbour Dawood and his family. The main arc of the narrative follows Ahmad’s transition from fighting with the British against the Ottomans to fighting against the British as they seek to establish their control over Iraq. The second central character, Carwyn, appears more intermittently, his story beginning with in a mining village in Wales and leading up to his reluctant decision to enlist in the British army in order to escape his stepfather. Carwyn then goes through Gallipoli and Egypt with the British army before he  arrives in Iraq as part of the Mesopotamia campaign, where his fate is linked with that of Ahmad and his sons Emad and Yusuf.

Carwyn has no love for the British, and his conflicted loyalties in being a Welshman yet also part of the British army —  “A conquered man [who] always knows conquest when he sees it” — lead to an interesting tension and some of the best scenes in the novel, such as the following exchange:

“What’s the second lesson?” Boutros swallowed, and slammed his fist on the table energetically. “Fuck the English!” He laughed. “No offence.”

“Trust me,” said Carwyn, raising his cup, “none taken.”

Izzidien’s writing is at times humorous, as above, but most often it is sensitive and lyrical, her eye for detail enriching descriptive passages like this:

The clouds that hung above the Rhondda Valleys had a way of making everything below them appear gray. Even in the summer the skies were more ashen than blue. They blocked the sun from redbrick houses, from the freshly painted signs that hung above the butcher’s and the baker’s, but most of all they shrouded the hilly forests that surrounded the valleys, dulling the brightness of lush deep greens and rolling yellow meadows.

At times we are distanced from the characters, with the narrator taking an assured tone (“the present is an arrogant time in which to live, always has been”). At other times, we are brought very close to them emotionally, as when Izzidien writes about the tentative relationship between Ahmad’s son Yusuf and Dawood’s daughter Amina, or Dabriya’s worry for her family.

The main characters in this novel are male: Ahmad, Carwyn, and Ahmad’s sons Yusuf and Emad. However, we also have an important female character in Dabriya, who appears in the role of supportive wife and kind mother. Later on in the novel, Dabriya comes more into her own, and even has a thrilling chapter where she rides off to rescue her son Emad. When her son Emad tells her she “must be the bravest person [he] know[s]” she responds:

“I am nothing special, Emad. This is what women have always done, but we don’t write the history books. We rebuild countries, but the stories always end at the victory so the men, they never talk of our fight.”

A more independent female character is Dawood’s daughter Amira, who has her own presence in the novel, separate form her slowly developing relationship with Ahmad’s son Yusuf. For example, in the following scene Amira explains her feelings about the way she and her family are treated by other Baghdadis because of their religion:

“I think…when they look at us, they don’t see us. They see only our religion,” said Amira. “They see that our clothes are a little different and hear that our Arabic is a bit thicken. They don’t care about all we’ve contributed for hundreds of years. They don’t care that we are from here too. It’s not enough.”

“You are enough,” said Yusuf “You’re Baghdadi, just like us.”

There are similar touching and effective scenes throughout the novel, though the  number of sub-plots and characters do at times confuse the main thread of the narrative. As with many debuts, the novel perhaps tries to do too much, tell too many stories at once. An example is the story of Ahmad’s friend Salim, his beloved Ayesha and the traitorous Abdelmajid, which initially seems only tenuously related to the narrative. Abdelmajid does reappear much later in the novel, but by that time he seemed to me to be somewhat tangential and unnecessary to the main plot. Ayesha, a spirited young woman, is a wonderful character who appears all too briefly, yet she too seems from a structural point of view unrelated to the main plotlines. Despite these shortcomings, the main story that alternates between Carwyn’s perspective and the stories of Ahmad and his family does maintain enough narrative drive to lead us into to the climactic scenes of the novel, towards an ending that is somewhat abrupt yet effective and heartrending.

The Watermelon Boys is one of very few English-language novels which retells the Great Arab Revolt from the perspective of Arabs. There are only a few other example I can think of which dramatise this era, such as Fadia Faqir’s Pillar of Salt and Jamal Mahjoub’s In the Hour of Signs, both of which are set partially during British rule or look back on the time of the Arab Revolt. Though Anglophone Arab fiction is a rapidly growing category, most novels thus far seem to be set in contemporary times, responding to the war on terror years, to the concerns of recent decades. Reading about the Arab Revolt in English is too often to read about a period of time known primarily through the mythology around Lawrence of Arabia. In fact, anything related to this period is often linked to Lawrence of Arabia. This was brought up some time ago in a Q& A about his film Theeb, where director Naji Abu Nowar was asked to what extent he was influenced by the imagery of Lawrence of Arabia, to which Abu Nowar responded:

“Lawrence of Arabia is an amazing film…it has nothing to do with the actual history… I think what happens is people living outside of Jordan, there only reference is Lawrence of Arabia. But for us this is our history…This is our story and we are just making our stories.”

The Watermelon Boys is well-worth reading for many reasons, not least because, like Theeb, it unapologetically takes on telling “our stories” from our perspective, telling a fragment of the Arab Revolt story through the eyes of Arabs (and one Welshman).