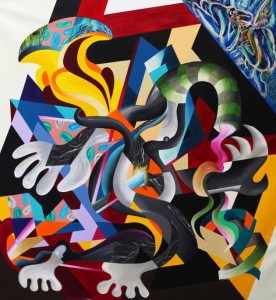 Art Dubai is part of Dubai’s Art Week 2015. This year, Art Dubai is returning “for its ninth edition from March 18-21, 2015 at Madinat Jumeirah, the global fair include 92 modern and contemporary galleries from 40 countries, a non-for-profit program including a string of residencies and commissioned, curatorial and educational projects.”

According to Anna Seaman at The National:

Art Dubai can now claim to be the largest single showcase of Arab artists in the world.

This year, the figure of 500 artists has been quoted. The exhibitions are divided into the Modern, Contemporary and Marker. In the Modern section, “Dubai’s Meem Gallery will present a selection of works by the Iraqi modernist Dia Azzawi and the Syrian master Marwan [Kassab-Bachi]. Green Art Gallery will show pieces from Mahmoud Hammad, a pioneer of modern Syrian art.” Also “Ayyam, which has two branches in Dubai and four others in the region, will show work from Nadim Karam, Faisal Samra, Safwan Dahoul, Sama Alshaibi, Kais Salman, Mouteea Murad, Athier Mousawi and Alireza Fani.”

The art on display will be a mix of sculpture, installation and painting. The colourful horizontal lines of Murad’s Trial No 91: When Spring Blooms challenge the use of the season in the term The Arab Spring, which has become increasingly associated with violence and claims back the positive promise.

David Light looks at the “social aspect” of the event in an interview with concept artist Yazan Khalili.

Gulf News tells you why you should visit here, and The National has your guide to Art Dubai 2015 here.