Bouchra Khalil, a Moroccan artist  who works with video and mixed media installations,  explores the issues of illegal migration and nomadism in ways which blur the lines between cinema and art and documenatary practise. In works such as The Mapping Journey  Project (2008-2011), she  investigates the interrelation between migrations and colonialism, mapping migratory trajectories in ways that are somewhat similar to Mona Hatoum’s Routes,  as the speakers narrate the lived experience of illegal emigration, creating an “alternative” map of the Mediterranean region by marking their own zigzagging routes on the flatness of the maps.

“Their journeys demonstrate how lives today cannot be defined by cartographic contours. By taking their experiences as a starting point, and not as exceptions, Khalili challenges viewers to look at maps in a different way, reflecting the reality of migration and mobility.”

“a mixed-media installation that combines eight video works and a printed map. It proposes to draw an alternative map of the Mediterranean area, spanning from Marseille to Ramallah, Ramallah to Bari, Bari to Rome, Rome to Barcelona and Barcelona to Istanbul, based on eight clandestine journeys. It challenges the normativity of cartography, to reveal underground and hidden geographies. Inspired by philosopher Michel Foucault’s The Life of Infamous Men, the artist collected an anthology of existences, of “singular lives…which have become, through I know not what accidents, strange poems.”

Here Khalili talks about some of her work, including Straight Stories, in which people tell their stories of relocation and immigration and we listen to their voices while seeing disconnected images.

The Cartographer – Bouchra Khalili from Sharjah Art Foundation on Vimeo.

Khalili’s work revolves around the experience of migration and relocation on the individual, and this is the same theme that the Algerian artist Zineb Sedira has examined in works such as her video installation MiddleSea (2008).

“MiddleSea shows a man wandering about the empty corridors of a ship at sea. It is unclear where he comes from or where he is going or even whether this is about a real voyage, a dream image or a memory. Mikhail Karikis’s soundtrack emphasizes this ambiguity. MiddleSea provides a poetic, universal image of the journeys that generations of migrants have made, both physically, and in memory.”

Set on a ship cruising from Algiers to Marseilles, it unravels like a ballade, a visual meditation on the state of transit. The camera wanders over the white decks, sometimes catching the breathtaking immensity of the horizon, sometimes, in a series of verging-on-abstract shots, capturing the ethereal beauty of the tiniest details, the sea water caught in the deck’s rusted paint or the droplets in the boat’s wake. A man, alone, rambles in the empty corridors of the deserted vessel. He seems to be waiting, caught in a bubble of suspended time. It’s the Mediterranean, but it could be anywhere. The sky, the sea, the ship and the lonely figure, function like the schematic elements of an endlessly repeated story of departure and ever-delayed returns. The soundtrack, composed by Mikhail Karikis – a deft amalgam of location recordings, instrumental snippets and sound collages – comes to disturb the film’s almost too-smooth aesthetic. Combining unnervingly high pitches with the heavy breathing of the ship’s engine, it reinforces the overruling feeling of melancholic uneasiness and gives to MiddleSea a depth inaccessible to the visual alone.

Perhaps inevitably given this concern with migration and movement, both artists share a concern with language as a cornerstone of identity. Sedira’s work Mother Tongue (2002), is a video triptych showing the shifts of languages over the course of several migrations, from her Algerian parents’ Arabic, her own French, and her daughter’s English, and the result of a grandmother who is incomprehensible to her granddaughter.

Showing Sedira speaking to her mother on one screen, the artist speaking to her daughter on another, and Sedira’s mother and daughter unable to converse on a third, this work brought into sharp relief the ineluctable consequences of immigration and the set of intimate means of communication – tender looks and gestures – existing within and outside a shared language. 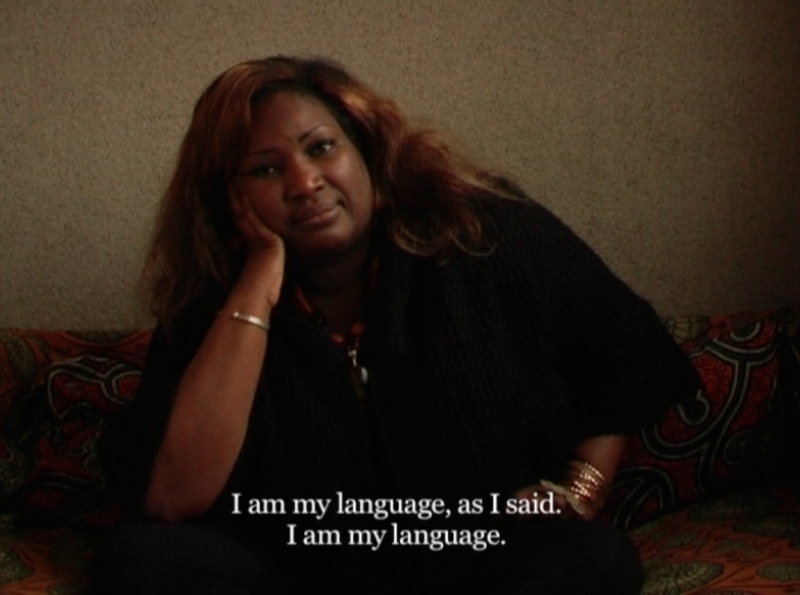 While Sedira’s work focuses on her own family, Khalili’s Speeches Series (2012-2013) – the first chapter entitled Speeches: Mother Tongue – is a project which is comprised of a five-channel video installation focuses on the importance of language as a cornerstone of identity for exiled and immigrant peoples through their rearticulation of the speeches of people such as Mahmoud Darwish and Malcolm X:

Khalili invited five individuals to translate and recite into their own dialects and languages fragments of speeches by Malcom X, Mohamed ben Abdelkrim El Khattabi, and Mahmoud Darwish, among others. Exiled from their home countries, the speakers anchor the speeches in their own contexts and bodies—in Paris and its suburbs—but raise the question of translation, of creolization as Édouard Glissant defines it, and of the superimposition of political contexts, and the movement between native languages as elements of political struggles.