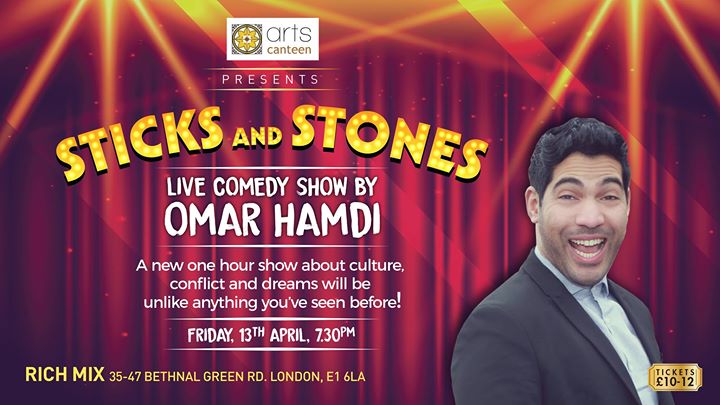 Omar Hamdi’s comedy special “Sticks and Stones” was filmed tonight at the Rich Mix. This meant, among other things, that Hamdi’s grand entrance was recorded again at the end, along with several jokes the comedian had skipped over during the actual show, but the audience was still whooping and clapping and full of good will despite the cameras and the fiddling with continuity issues for the recording — and that is probably a sign that they had enjoyed their evening.

Nabeel Abdulrashid opened the show, with material ranging from fatherhood to being British and Nigerian and Muslim and the awkwardness that ensues from white people confused by this fact.

Omar Hamdi’s jokes meanwhile meandered through an astonishing number of subjects from ageism to hijab, and from the illogic of racism to uptight British masculinity, tenuously held together by stories from and about a recent trip to New York and the differences between the UK and the US.  While one or two of the jokes were familiar from older material, there was also much that was entirely new, at least to me, as well as a lot of banter and improv that kept the audience laughing even through the necessary for the camera bits.