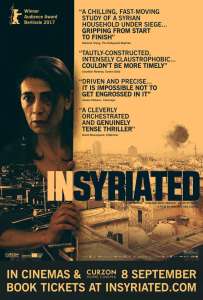 I went to see Philippe Van Leeuw’s much-acclaimed Insyriated recently, with that by now familiar conflicted feeling about the lines between entertainment and reality. After the most recent events in Ghouta — so difficult to watch, so easy to scroll past on social media timelines — that unease was all the more present as we walked into almost empty theatre to witness the trials of an imagined day in the life of an imaginary Syrian family trapped amidst bombs and snipers.

This is not a film where you should take popcorn in with you.

The positive reviews are justified. The film manages to sustain its tense atmosphere throughout, and to make the viewer feel as entrapped as the characters. As with the Palestinian film Dégradé  (which I wrote about here),  we feel the claustrophobia of living in this enclosed space where attempting to leave means risking death. The film confronts us with the delimiting of choices, the shutting down of options. Many of the conversations about daily issues, the lack of water, the trouble with phone lines, the need to hide when the bombs fall, were familiar from conversations with family in Benghazi and Derna, and with the newly arrived Syrian immigrants here. It’s this strange feeling of the exceptional, the horrific, becoming every day. When you can no longer find the energy to react to the news that there has been another bombing in your country, something is wrong.

It’s difficult to say I enjoyed the film, but it was moving, effective, troubling.

That said, there was something about a particular scene that was troubling in another way to me, and I wasn’t sure why until I’d talked it over with someone.

The moment when the two villains enter the apartment felt a little like it came from an Egyptian melodrama. Not because this level of impersonal savage misogynistic violence doesn’t happen, but because the prolonged scene tapped into the too readily available, this story of the blonde sacrificial offering wrapped in blue, a Madonna with her child in her arms, terrorized by savage Arab men, one in a suit and glasses and one a dumb grunt loyal to his master for unexplained reasons.

There was also the niggling nitpicky issue of the authenticity of accents. As always with these details, it felt as though the film was not made for those who would know the difference between Syrian and Lebanese and Palestinian dialects.

But the film is very much worth seeing for all that, not least because Hiam Abbas as the Palestinian woman who will not be forced out of another home is brilliant, bas, full stop.