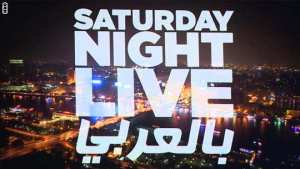 Madam Mazen writes about a new Arabic version of SNL, to be broadcast by the satellite service OSN, with the first episode featuring Egyptian actress/comedian Donia Samir Ghanem.

The new program comes in the wake of El Bernameg, hosted by Bassem Youssef aka “Egypt’s Jon Stewart”, taken off air for being too incisive (and red line crossing) in its satire.

Apparently Bassem Youssef was asked to host the show but backed out. However two former members of El Bernameg, Khaled Mansour and Shady Alfons, are involved.

Although Arabic SNL will have to play it safe, the lead writer notes that ignoring politics all together is not an option:

“It’s a challenging time for anyone who writes in Egypt,” said George Azmi, the lead writer on SNL in Arabic. “Everyone is antagonized… You cannot make a decent joke without offending someone…Never mind the regime… the people themselves are very antagonized, both right and left. And at the same time a lot is happening (politically) so if you ignore this completely you will also appear out of tune,” he said

Donia Samir Ghanem, who has impersonated Arab singers such as Assala in the past,  reminds me somewhat of Mais Hamdan, the comedienne/starlet impersonator who was a main cast member of the comedy program CBM that ran on MBC during the 2000s.

CNN Arabic has some clips from SNL Bil Arabi in its report, which make it look like Arabic SNL is set for the same impersonation and slapstick style comedy, although even CBM was unable to avoid politics during the Iraq war years.