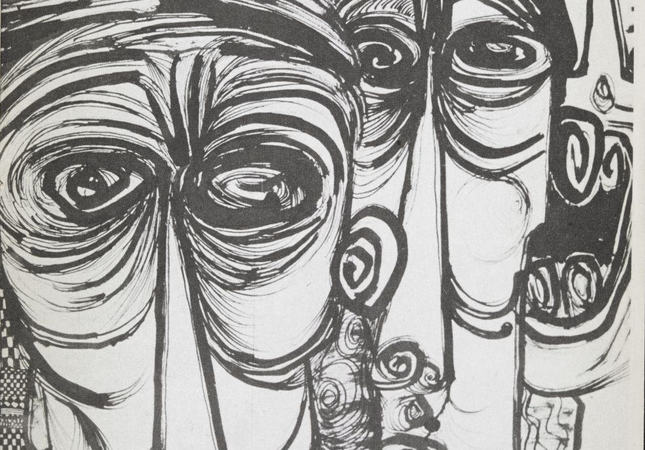 Ibrahim El Salahi’s “Arab Spring Notebook” is on exhibition at Galerist’s project space Studio from Sept. 1 to Oct 3, Daily Sabah reports. His earlier exhibition, at the Tate, was a retrospective, covering the more than five decades of Salahi’s career, which highlighted the fact that modernism was not exclusively European.

The “Arab Spring Notebook” is comprised of “46 black, ink drawings originally made in a single sketchbook” described as a “artistic and historical documentation of the uprisings against tyranny in the Arab World.” The notebook itself, or at least one page of it, was previously displayed in the retrospective, as Kaye Whiteman writes:

Ibrahim showed me a fascinating sketchbook of pen and ink sketches titled “the Arab Spring?” The question mark is deliberate because of the darkened paths down which the ‘spring’ has moved. In the exhibition I was delighted to see the small sketchbook is there in the memorabilia case, but with only one page exposed. But it is so instantly instructive and politically relevant that all the sketches deserve full exhibition.

Ibrahim El Salahi describes himself as a “picture-maker” and says that for him there are three concentric circles when he thinks of the reception to any work of art: the ego, the people in your community or immediate circles, and all humanity.

According to El Salahi, the Arab Spring revealed energies that have been suppressed for a long time by authoritarian regimes. He viewed the revolts as a rebellion against corruption and injustice, and his views are reflected in his ink drawings, which mostly depict tyrants and their victims. Since he suffered the injustice of tyranny in prison, El Salahi’s took on the events personally and his views and feelings about the dramatic events are thus reflected in his work, which depicts mostly waves and currents of water and shadowy figures.