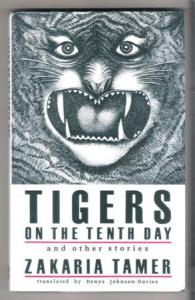 Zakaria Tamer is among a number of Arab short story writers who are slowly beginning to receive the recognition they deserve outside the region. Yusuf Idris, another master of the short story form, also comes to mind.

Now, as part of Banipal 53 – The Short Stories of Zakaria Tamer which “heralds this great writer with 29 new translations of short stories, articles, reviews and a major interview, there will be “on-the-spot readings” of Tamer’s works every hour at the Edinburgh Arab Festival.

The readathon is co-organised by Banipal (UK), Magazine of Modern Arab Literature and Institute of Arab and Islamic Studies, University of Exeter.

Zakaria Tamer’s contribution to contemporary Arabic literature is extraordinary – for his language, his style, his topics and above all for his satire and black humour.  His writings refute every stereotype held about the Arab world in the west.

Here is a short documentary about Tamer’s life and works (Arabic).

Tamer speaking at an event to support the Syrian uprising in 2012:

Some of his children’s stories have also been translated.

From his children’s books to his very short writing to his longer novellas, Tamer writes about injustice and tyranny, fear and stagnation, encapsulated in one of the red threads that run through his oeuvre, the idea that there are none so blind as those who will not see, that many of us choose to go through life like donkeys looking down at the ground.