Where does tongue-in-cheek parody end and self-exoticization begin? At what point does the Arab woman artist, stepping into the so-often imagined space of “The Harem” risk pandering to an audience that seems to have a never-ending appetite for orientalist remediations?

Lebanese photographer Rania Matar’s wonderful and insightful A Girl in Her Room series (capturing teenage girls in their most sacred space, the bedroom) includes some photographs that are clearly posed to mimic familiar odalisque imagery:

Was the subject asked to pose this way? Is the audience being invited to share a joke with the subject, or at the expense of the subject? Or is it simply playful, poking fun?

Photographing girls from the Middle East and girls from the US, Matar says that she “became fascinated with the similar issues girls at that age face, regardless of culture, religion and background.”

I was discovering a person on the cusp on becoming an adult, but desperately holding on to the child she barely outgrew…Posters of rock stars, political leaders or top models were displayed above a bed covered with stuffed animals…photos, clothes everywhere, chaotic jumbles of pink and black make-up and just stuff, seemed to give a sense of security and warmth to the room 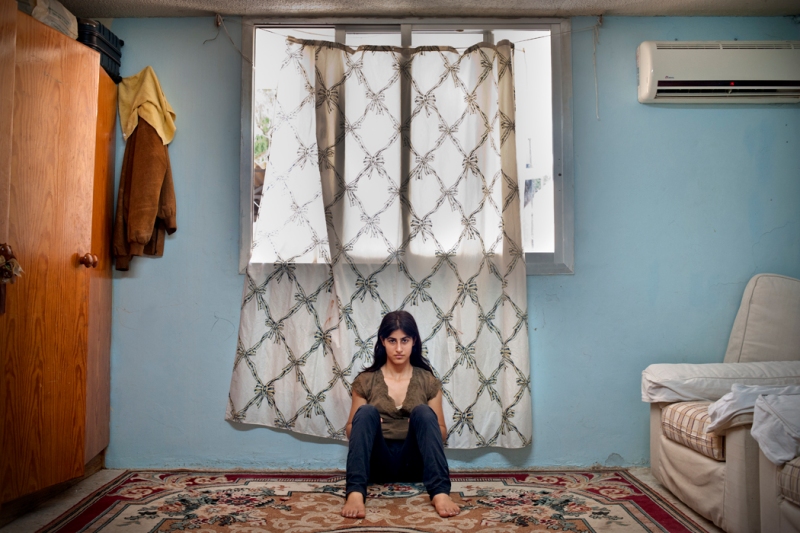 And where in this girl-becoming-woman does the odalisque pose come in? And how should we read the image of the girl holding the pink scarf up to cover her face?

The veil is such an over-determined symbol in part because it exists in the overlap between the categories that Arab women are often divided into. As Evelyn Shakir writes:

According to popular belief, all Arab women can be divided into two
categories. Either they are shadowy nonentities, swathed in black from head to foot, or they are belly dancers – seductive, provocative, and privy to exotic secrets of lovemaking. The two images, of course, are finally identical, adding up to a statement that all Arab women are, in one sense or another, men’s instruments or slaves.

Arab women artists who explore the veil must deal with these two images  – as Matar does with her odalisque and her refugee girls, as Moroccan Lalla Essaydi’s work does with her veil-dancers and her fully covered women. 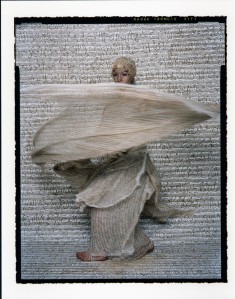 Essaydi has produced some sumptous, beautiful images that reproduce  the harem and that draw you in to this imagined private women’s world – but to say what?

In a Jadaliyya interview of Essaydi, the artist responds to this question directly, arguing that she is “not “reproducing” the “exotic” and “mysterious” depictions of Arab women from Orientalist harem art” but “deconstructing these paintings by using the same stereotypes one finds in these paintings.”

The inclusion of calligraphy in many of Essaydi’s works allows the artist to intervene directly. As she puts it, “the interplay between graphic symbolism and literal meaning, as well as the European assumption that the written holds the best access to reality, are constantly questioned.” 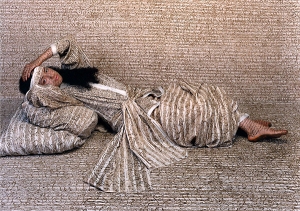 Much has been written about Djebar’s work, and how “Djebar takes the (supposedly) historical portrayal of Delacroix’s harem of women, and pushes it forward through the struggle for independence and into the post-independence era” – whereby the harem is stripped from its seductive icolography to the  restricted space of prisons and mental asylums.

Another intervention (which looks back on Matisse this time) is Syrian-born author Mohja Kahf’s poem “Thawrah des Odalisques at the Matisse Retrospective”, which beings:

Yawm min al-ayyam we just decided: Enough is enough / A unique opportunity, the Retrospective brought us all together / I looked across the gallery at Red Culottes and gave the signal / She passed it on to Woman in Veil and we kicked / through canvas / Most of us have very good legs – lower body strength, / you know / The Persian model needed help, but it  wasn’t her, / it was the way she was drawn.

In this poem  the women struggle out of the paintings: “The odalisques become alive, the women are freed from the hegemony of their artistic representation, they are, in fact, emancipated through Kahf’s ekphrastic storytelling”. This, for some, become a way for Kahf to “restore the voice of ancestral Muslim women” – but perhaps it would be more accurate to say that like Djebar, she borrows the voice of these familiar reclining figures to amplify her own anger at other forms of imprisonment. As Rafeef Ziadeh does:

I forgot to be your every orientalist dream, genie in a bottle, belly dancer, harem girl, soft spoken arab woman


For me, the most powerful remediations of the harem are ones that connect the iconography of the harem-girl to broader struggles:

Suheir Hammad does this:

Here,
dark woman
I will leave my golden beauty
and take you
who are also permitted:
“Hey girl, how you doin?”
“Que pasa niña?”
“Hey baby!”
“What are you
–
Lebanese, Armenian, Spanish,
Puerto Rican,
Italian, Mexican

Some will say, come on, this was all a long time ago. Mattisse and Delacroix and even Picasso – this is old news. Get over it.But type veil and harem into google images today and you will come up with a never-ending proliferation of harem girl halloween and belly dancer costumes (likewise, geisha girls costumes are prevalent). Should Arab women artists ignore this and seek their material elsewhere, or should they  continue to risk and (sometimes fall into) pandering and self-exoticisation, as they work to answer and alter these images?

The problem is that the very many history books, novels, poems, photographs that seek to correct or analyze orientalism and “unveil the harem” themselves depend on this appetite. So how do Arab women artists work with this?
Some of the artists represented here may fail in getting out of this trap – but the fact that they are there, fighting back, is worth something.