In a recent Al Monitor article, Mona Alami writes about the work of artists from Iraq, Lebanon and Syria who are reacting to ISIL. Alami discusses the work of  Lebanese artist Raouf Rifai, and Iraqi artists Nada al-Hasnawi, and Aqeel Khreef and Syrian Kais Salman.

All these artists have learned to scrutinize the country’s political and social reality, deconstructing art by using irony. With a lot of creativity, intelligence and humor, they underline with their paintings and sculpture the political and social corruption the Arab world is facing and the depravity and hypocrisy of terror organizations, which are killing innocents in the name of religion, as well as their ability to morph into an international recognized cliche.

Darwish is seen to be blindfolded, which depicts the Arab world’s unpredictable future. Two letters are to be noticed near the figure concerned, “DA“, which is Russian for ‘yes’. “Da, Da… Yes, yes, we do as you say… yes, yes, you are right”, Raouf Rifai explained the relevance of the word to the painting. Rifai is trying to open eyes to the oppression that the Arabs are going through, the lack of freedom of speech, which is what bothers him the most. This is also why I mainly loved the painting: it’s simple, rich in Arabic-themed colours (different shades of brown, black and white), the very simple composition where the figure is centered, eliminating the need for unwanted space, drawing all the attention to the subject matter: Darwish.

How can artists explore the savagery of organisations like ISIL/Da’esh? As Mahmoud Mawtani discusses in an interview with the artist, Nada al-Hasnawi’s new exhibition deals with “the stories of violence, displacement and enslavement of women at the hands of the “Islamic State of Iraq and the Levant” (ISIL).”

Similarly, Aqeel Khreef has mocked ISIL by representing the terrorists in sculptures using old shoes embellished with metal and shoelaces.

“I wanted to portray the extent of the criminality and ugliness and ugly acts of the organization’s members,” Khreef explained to the AFP. The sculptures “appear sick in their mentalities, and bloodthirsty.”

The shocking effect of Kais Salman’s latest exhibition “Civilised Society” is eloquently described in this article in Daily Star:

“Civilized Society” is vibrantly, almost shockingly colorful. The shades of vivid, kindergarten blue, red, green and pink leap out from the gallery’s black walls as soon as viewers enter the space. The juxtaposition of cheerful shades and somber subject matter helps to emphasize the irony in Salman’s portraits, in which broad smil 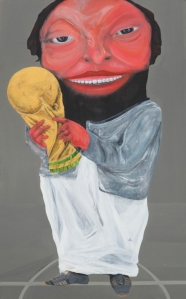 es are topped by calculating eyes.

Nohad Topalian writes about Syrian artists in an article examining the responses of artists to the war, discussing an exhibition of the work of Salman alongside Nihad al-Turk, Abdul Karim Majdal al-Beik, Othman Moussa, and Muhannad Orabi. The article quotes Salman as saying:

“While art is incapable of resolving the situation, it rings alarm bells regarding the existence of evil ideologies in the region that compete with beautiful concepts, which are being slaughtered.”