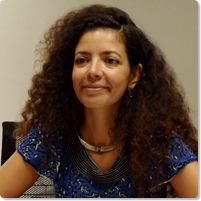 David Schembri interviews Moroccan “cultural activist and consultant” Khadija El Bennaoui on art, politics, and activism in a region defined by unrest. El Bennaoui will be a speaker at the first annual Euro-Med International Conference on Cultural Relations, being held at the University of Malta Valletta campus on  4-5 September.

An indication of her busy schedule – El Bennaoui was interviewed via Skype, being in Jordan for Dewan, a symposium retreat for performing arts practictioners which took place in Wadi Rum from 29th to 31 August.

In the interview El Bennaoui  discusses the challenges facing Arab artists, from funding to infrastructural and legal issues, such as the lack of recognition for working in the arts as a profession, and of course the increasing restrictions on mobility for artists from “troubled areas” from Palestine to Syria.

“Art in turbulent areas is even more and more active, it is more creative. I don’t want to say that wars inspire artists more than peace, but artists become more committed and engaged. They cannot avoid being creative,” says El Bennaoui. “Art itself is poetic and political. Being an artist is always being political.”

The interview also touches on the increasing prominence  of Arab art internationally and the positives and perhaps limitations of this spotlight and increased visibility, often  “solely because of war or political reasons.”

As El Bennaoui puts it:

“I don’t want to attack this vision of things, but I would be very careful with it. I would work very carefully with it . Is it opportunistic, is it humanitarian action?”

El Bennaoui has previously been interviewed about performing arts and the Arab world, in particular post-“Arab Spring”  by Shintaro Fujii here.

Since 2005, El Bennaoui has been the Coordinator of Art Moves Africa, the first
independent pan-African Fund dedicated to the mobility of artists and cultural operators within Africa. She talks about this experience in the video below (in Arabic).