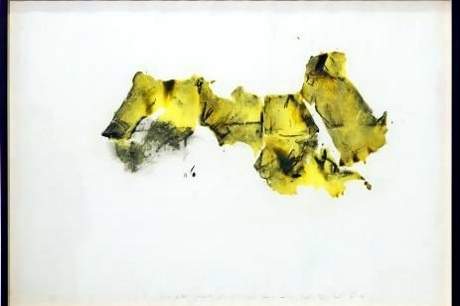 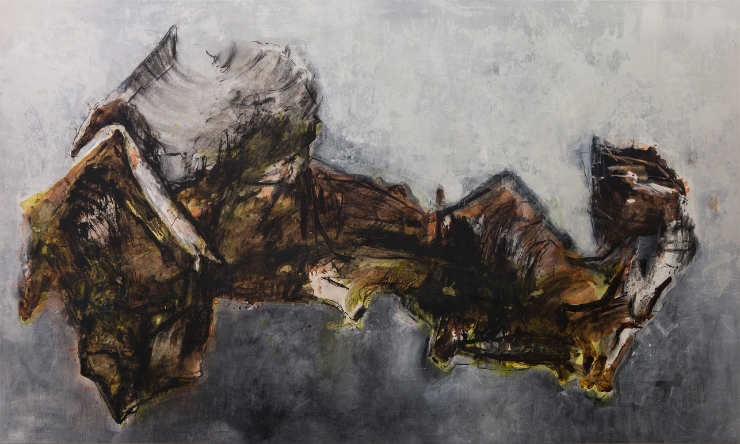 The two works of art above, by Lebanese artist Youssef Shawki, are described in an article in The National as at the centre of his exhibition, Acid Fields, “a collection of abstract works featuring tormented and distorted figures.” The only two paintings that veer from illustrating bodies are the maps:

The first, the smaller of the two, is a map of the region, identical to the Baath party logo with its motto in Arabic that translates to something similar to unity, freedom and socialism. In the second, much larger canvas, the map is inverted and the colours swirl to a muddy darkness.

“I showed this painting to an 8-year-old girl and asked her what she saw,” he says. “She said ‘the beast’ and this was precisely the phrase I had in my head.”

The two maps reflect not only the tensions between the Baathist vision of Arab nationalism and the contemporary reality, but also the long-standing issue of what exactly one should make of that phrase under all the maps of the Arab world, “Al-Watan Al-Arabi” (the Arab homeland). In the introduction to his book, The Arab World: Society, Culture, and State, Halim Barakat describes his analytical starting point as “social rather than political reality.” He acknowledges that politically the Arab world is “a collection of several independent nation-states that increasingly, and particularly in times of crisis, assert their differences and separate identities.” However he insists on viewing the Arab world as an overarching society united by a common language and shared culture. For Frank Salameh however, it is diversity which is inherent to the “Arab world,” while unity is an ideologically imposed illusion. The idea that everyone who speaks Arabic is an Arab, Salameh argues, was borrowed from European ideologies of identity from the twentieth century, in an attempt to create a demographically massive “Arab people,” stretching from the Gulf to the Atlantic, in Jamal Abdul Nasser’s famous phrase, including groups which are not only enormously diverse but in some cases do not want to be included in the so-called “Arab world.”

While Barakat and Salameh approach the problem from diametrically opposed positions, both investigate the underlying forces polarizing the region between unity and diversity. These polarities and conflicting orientations apply both on the level of the region and within each nation state, and necessitate a rethinking of place in order to reconceive the struggle over it. Diasporic Arab cultural production revises and challenge these competing conceptions of place, which undermine a coherent homeland that the diasporic imagination can reconstruct outside the place of origin. (Georgetown had a symposium on this a couple of years ago, under the title A Sense of Place: Arab World Diasporas and Migrations).

One of the problems that contemporary writers and artists from the region face is how to address these issues without recycling stagnant rhetoric. This is particularly true in the case of Palestine, as a primary symbol of pan-Arab nationalism. For Larissa Sansour, a Palestinian artist who has lived most of her life outside Palestine, “the ambitious ideas that we hope to achieve, like statehood and independence, have long since become…repetitive.” In order to break away from this sense of stagnation, she proceeds by positing alternative spaces, as in her project Nation Estate, created in the wake of the Palestinian bid for nationhood at the UN in 2011. 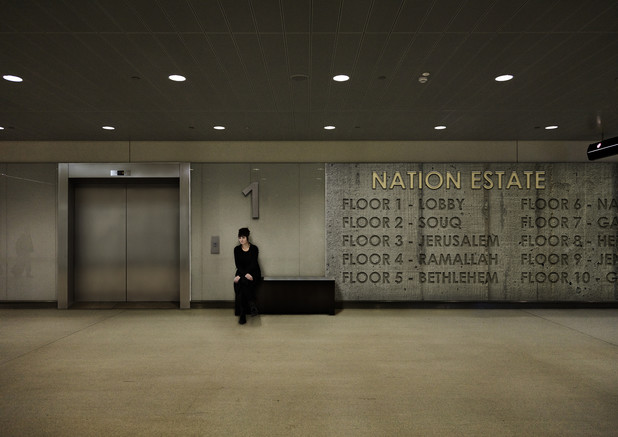 As Sansour describes it: “Each city has its own floor, Jerusalem on the 13th floor, Ramallah on the 14th…and so on. Intercity trips previously marred by checkpoints are now made by elevator. Aiming for a sense of belonging, the lobby of each floor reenacts iconic squares and landmarks.”

In Nation Estate, Sansour transforms the utopian dream of bringing the diaspora home, through a dystopian vision of a nation housed in a skyscraper constructed with international aid money. Nation Estate envisions a national home for the Palestinians within current geopolitical realities, but this is necessarily a parody of the sense of belonging anchored in place. To use Marc Augé’s terms, the most anthropological of places which  “want to be – people want them to be – places of identity, of relations and of history,”  are enclosed in the non-place of the “estate” skyscraper. The photograph used to illustrate the concept of “non-place” in the Wikipedia article on the term is of the Copenhagen metro escalators – an example of a non-place which is used in the Nation Estate video, as can be seen in this clip.

The situation of Palestinian displacement Sansour expresses is paradigmatic for many groups in the region whose aspirations for a homeland whether based on linguistic, ethnic or sectarian identity, are precluded by current borders. The problems posed by geopolitical realities for a sense of national identity in the wider region (often referred to as the greater Middle East) have impelled efforts to redraw the borders to better fit the assumption of fixed places with clear boundaries and stable associated identities. 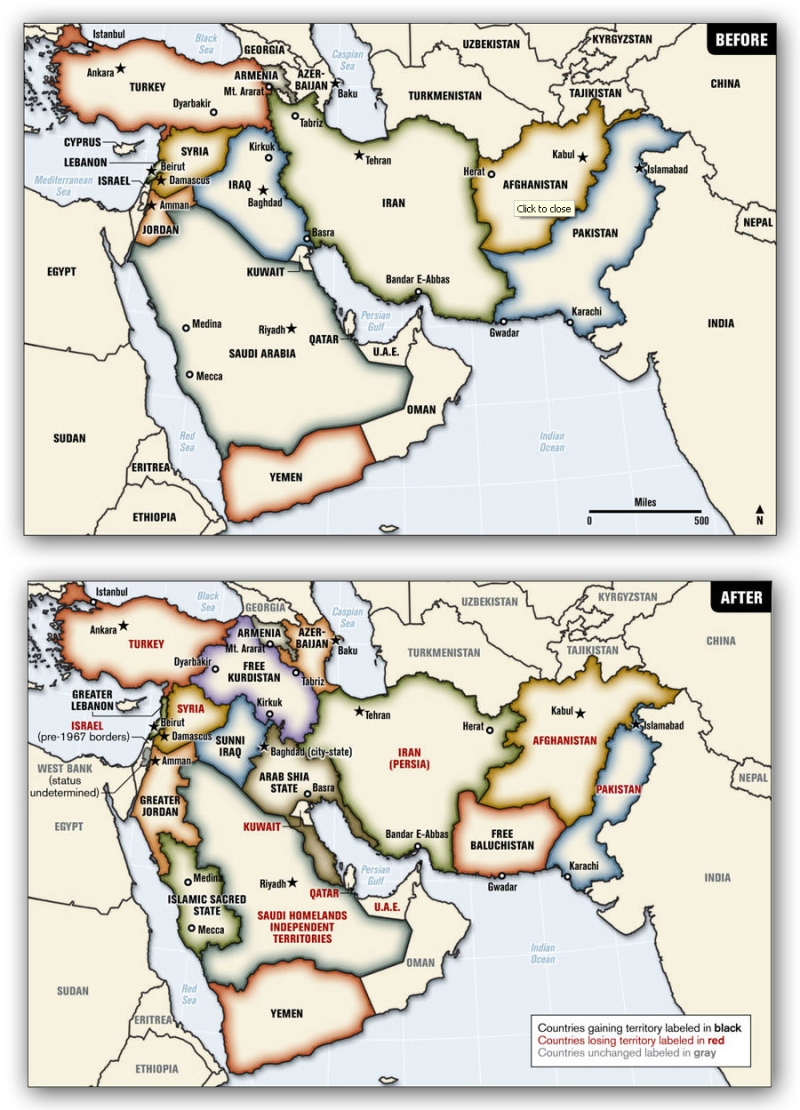 In 2006, in an article with the title “Blood Borders: How a better Middle East would look,” the redrawing of the borders based on ethnic concentrations and religious communities is described as “a mental effort to grasp the Middle East’s “organic frontiers.” The article warns of the consequences if “the borders of the greater Middle East cannot be amended to reflect the natural ties of blood and faith.”

In an article published in The New York Times in September of this year, Robin Wright made another attempt at amending the borders, in imagining  How 5 Countries Could Become 14. Wright’s map responds to current events, seeing various conflicts as a consequence of unnatural alignments of states and national, ethnic or religious identity. 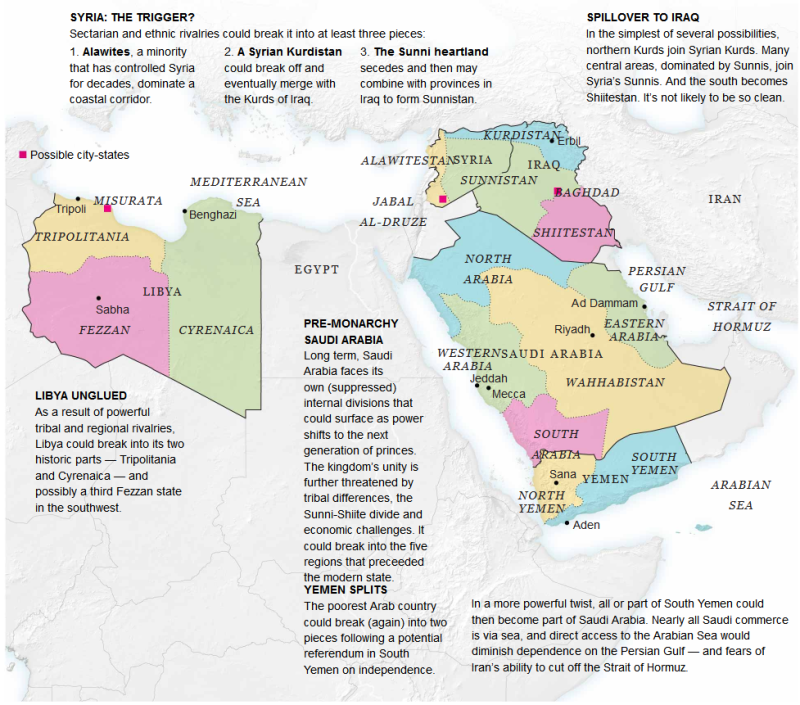 Responding to such remappings, Jordanian-American Oraib Toukan created a jigsaw puzzle of nations in her installation The Newer Middle East. Toukan’s map highlights the problems with attempts to define identity through geographic location, particularly in an area ruled for centuries by transnational empires from the Byzantine to Abbasids to the Ottomans. In Toukan’s map, the puzzle pieces don’t match the shape of any known country, dissolving the straight lines of the Sykes Picot agreement through which the French and British divided up the Levant in aftermath of WW1. Toukan’s map allows viewers to reconfigure the highly contested map of the region at no cost, encompassing endless alternative visions. The question “what is a nation?” in this context is not only about the construction of the ‘ethnic myth’ of common origin, but more basically, how to draw the geographical borders to allow this myth to be constructed coherently. The nostalgia that is at the center of diasporic experience is disrupted, both by the absence of secure agreed upon borders and by the lack of a common sense of identity within them.

In an interview about The Newer Middle East, Toukan says that the idea stemmed from the Ralph Peters map, which struck her, because as she puts it “I am interested when absurdity is or becomes the form”:

In 2006 I got an email that had an attachment of Condoleezza Rice’s new plans for the Middle East.  In it was a map entitled the New Middle East (‘al sharq al awsat al jadeed’).  The map was being circulated in both mainstream press and conspiracy theory circles and was presented as a master plan for redrawing the region.  Later it became clear that a retired US Lieutenant, originally conceived it to make recommendations on how a better Middle East could look ethnically, politically, economically and culturally.  His propositions included ‘a Phoenicia reborn’, an ‘Arab Shia State’, an Iraq divided in three, a Sacred Sunni State, etc. Generally, I am interested when absurdity is or becomes the form.  That is actually often my starting point.

Shawki’s two maps of the Arab world, Sansour’s Nation Estate and Toukan’s The Newer Middle East, all tread the line between the absurdity of place and tragic displacement, using black humor to reflect the radical absence of the most basic assumptions of place as stable and rooted in their contemporary reality. 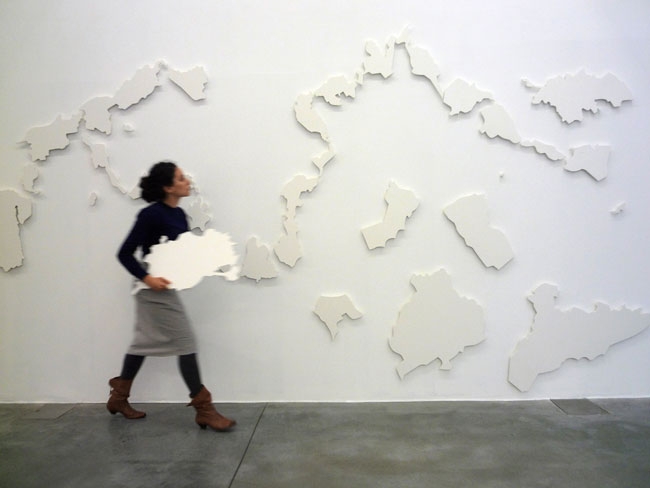