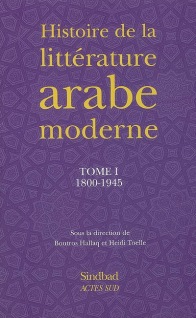 During the first year of the so-called Arab Spring Boutros Hallaq spoke at the Arabic Circle at the University of Chicago about The Arabic Novel and the Civil Uprising (which is what he called the Arab Spring), and there’s a recording of the talk he gave in Arabic here.

Here’s a summary/translation of the talk:

Hallaq begins by noting that everyone was surprised by the revolutions but in particular the intellectuals and novelists. He then goes on to remark on what these events should be called (as almost everyone does) and says he prefers uprising (intifada) rather than revolutions, as people were not seeking to destroy everything but to rescue the nation from those who had stolen it. The elite, the political elite, and the military elite, who were ruling the country, had been seen traditionally as part of the intellectual classes. And even those of the intellectual classes who had no ties to the regime, were not directly effecting this uprising. But indirectly, Hallaq argues, their writings did have an influence in creating the seeds of another culture and another project.

Hallaq talks about Mahfouz and the 60s generation, of course, in light of the change following the defeat of 67, which was not only a political defeat but the end of an era. Everything that had happened until then, the Arab Nationalist Project, had failed. It was defeated not because it was a failed project in itself but because the leaders were unable to overcome the challenges in its way. With the end of Nasserism, the centre of intellectual thought moved from Egypt and the Levant moved to the Gulf, which bankrolled the armies and the economy and entered the culture of the rest of the Arab world. This shift to the Gulf put the Arab world in a completely different framework than the Nahda, with the cultural framework changing radically because of the source of funding having changed.

So Hallaq says, the question is, why did we fail?

Hallaq argues that before this shift intellectuals used to talk about history and the heroes of history and socialism, and the rural people. These were ideological novels, moral lessons. After the shift talked about the individual, the Arab citizen, and why the individual had failed.

Hallaq uses the example of Tahtawi’s project to cojoin the outer sciences (technology) with the inner sciences (humanities, culture) which he says has failed since 1967. Hallaw argues we have been unable to distinguish between science and culture, that people have absorbed the technology, or had it grafted onto their lives without adapting culturally.

As an example, Hallaq refers to Jamal al-Ghitani‘s Zayni Barakat, which is not he says, a historical novel, but an expose of an oppressive state which destroys society and individual through the direct terrorism of the cheif spy who is a stand-in for the mukhabarat, dreaming of programming people, even the fetus, in order to make them obedient tools in the hands of the powerful.

There is also the indirect terrorism of utilizing religion: this is what Zayni symbolizes as an outwardly devout man who is in fact a hypocrate and in the name of religion or under the cover of religion is able to control society.

The other face of religion in the novel is of the dervishes who escape and hide away from reality, and their revolution is abstract, outside the real world, unable to affect real social change.

Hallaq gives the example of Son’allah Ibrahim‘s novel Al-Lajna (The Committee), where the person has become a dwarf, considering himself a cockroach, and through the novel explores what has made the Arab individual so debilitated as to consider himself inhuman. Ibrahim’s Tilk al-ra’iha (The Smell of It) is another example of what forces people into this narrow life, even the title suggesting a nauseating stench that should push people to escape their death-in-life for a true life. Then there is Najmat Aghustus (The Star of August), the main point of which is to show that Arab modernity is false. The novel is in three parts like a pyramid, with the second part dealing with the Dam, while the other two parts are connected by parallels. By tying together the history of the Pharaohs in the third part and the history of the character’s life in prison in the first, Ibrahim shows that life had not changed: Pharoah then and Pharoah now is the same, only the means of oppression have changed.

Of the same generation, Emil Habibi‘s Al Mutasha’im (The Pessoptimist), places the Palestinian specifically and the Arab generally in a historical framework which leads him at the end to be entirely unable to act. The important thing is not so much the context of occupation and colonialism but the inability to face this fate and withstand it or struggle against it. Hallaq notes that Habibi understands tragedy in its Shakespearean sense, as the individual facing destiny, rather than in the religious sense of a trial or a burden God has placed on the individual.

Hallaq moves on to the generation after the 60’s generation. The first person he cites here is the writer Abdulrahman Munif, mentioning that he has a Saudi writer and a Palestinian-Iraqi mother and was exiled from Saudi, living in the Levant, Syria, Iraq and Lebanon. Having been part of the Baath, he left politics disillusioned with its ability to bring change and turned to literature. Hallaq mentions Nihayat (Endings), which tells the story of a time of drought and famine when people turned to hunting for their food. The principle person in the novel is the anti-hero Assaf who the others call mad, who is a normal person, uncultured and unlearned, but able to understand the connection with the environment, the simple philosophy of ecology, advising people not to overhunt. Here, social change does not come from the intellectual who teaches or the politician who guides, but it comes from the individual who directly transfers his awareness to society through communication. True art in this novel is the art of speech and listening, not a relationship of power, whether religious or political. Culture cannot be bought from outside, it must well up from within.

Hallaq also mentions Palestinian writer Hussein Barghouti particurlarly Al-daw al azraq (The Blue Light) and Sa Akun Bayn al-Lawz (Among the Almond Trees), semi-autobiographical novels which explore the connection between the creation of self and meeting the other, the connection to Palestinian and land, and dwelling on spirituality and the mind and fantasy. Hallaq mentions what he sees as the relative newness of literary autobiographical writing in Arab literature, since the writer has been intimidated by the doubleness and schizophrenia of their lives, and the pressure from society. Hussein Bargouthi was able to avoid this schizophrenia and depict a unified self. Hallaq also mentions Edwar al-Kharrat‘s individualism and Sufi leanings and Abbas Beydoun, Maraya Frankenstein (Mirror of Frankenstein), speaking of his life and his experience into a mental health institute, speaking of his experience as a Shia living in Tyre.

Hallaq also mentions Mahmud al-Massadi, who was a forerunner of all this, before the generation of the 60s. His novels, Al Sudd (The Dam), Hadatha Abu Huraria Qall (Abu Huraria Said), Mawlid al-Nisyan (The Genesis of Oblivion), revolve around the individual.

Hallaq goes back to connect all this to the Arab revolutions, by saying the protests were not about bread but about dignity, the dignity of the individual, without whom society crumbled. This quest for dignity comes up from the tragedy. Bouazizi’s sacrifice is not suicidal or terroristic, but facing a tragic destiny, not seeking  martyrdom out of hopelessness but a refusal of humiliation and a quest for dignity. For Hallaq the protests in their beginning at least were not ideological but based in reality – nationalism is necessary as a spur to revolt but must be inclusive: the Arabic speaking world doesn’t contain only Arabs, but Kurds, Circassians, Armenians and more.

Hallaq insists the protesters didn’t go out based on political or religious ideology, but for the rights of the citizen, the individual, and the quest for dignity. Which is why there are no heroes, and there should not be heroes. Ultimately, Hallaq returns to his point that literature did have a role in insisting on the role of the individual.

In the Q&A sections they discuss the disconnect between the intellectuals and the youth, the reading public or the lack thereof (the myth of an Arab world that does not read), the shift from poetry to the novel, and the rise in colloquial literature, particulalry colloquial poetry and the rise of Arab rap focused on social justice and politics, as well as the influence of Gulf power and funding on literature. Hallaq argues that the Gulf is articifually “directing” culture rather than encouraging it from the prizes and those who award them to the Louvre transplanted to the Gulf all this is not related to creativity, which comes from life not artificiality. This brings them onto the leftists who have allowed themselves to be coopted by the leaders.