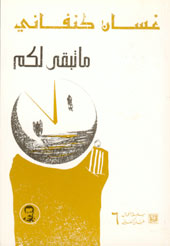 Ghassan Kanafani’s novella All That’s Left to You is more obviously allegorical than Men in the Sun and yet somehow also more complex, more psychological –  echoes of Faulkner’s The Sound and The Fury have been noted.

The story, probably too short to be a novella, tells the story of three characters – Hamid, his sister, Maryam and her husband, Zakaria. In the introduction, the narrator tells us that there are two other characters – Time and the Desert which work to build the powerful rhythm of the narrative through the contrast between the tick tock of a clock in in Maryam’s room, figured as Hamid’s footsteps across the space of the desert.The three narrators are Hamid, Maryam and the Desert. The action takes place in less than a day but with flashbacks. In practise the Desert narrator works as a third person narrator, and Hamid and Maryam’s voices overlap. Samir Dayal notes:

Kanafani is perfectly aware of instances in which the reader’s credulity is tested. In an author’s note to the first story, for instance, he warns the reader about the lack of any “clear distinction between places and times which are far removed from each other, or indeed between places and times at a single moment.” As Kanafani goes on to say, “The difficulty implicit in making one’s way through a world which is jumbled in this fashion is one that is freely acknowledged.”

The three characters are living in Gaza as the story starts. Hamid and Maryam’s father is dead and their mother has moved to Beirut. At the beginning Zakaria is about to marry Maryam because she is pregnant. Their marriage infuriates Hamid who decides leave Gaza and cross the desert to Jordan. Zakaria, the only human character who never gets to narrate, is the symbol of betrayal and faithlessness. On one occasion a group of Palestinian youths is rounded up by the Israelis and asked about a man named Salim. No-one comes forward, till Zakaria says he knows who Salim is. At that point, Salim himself comes forward without waiting to be pulled out and is duly taken away and shot.

Hamid hates Zakaria for his betrayal and is nauseated by the thought of him marrying his sister, which the reader likely joins him in as it turns out Zakaria is already married and has five children. As Hamid is crossing the desert, Zakaria tells Maryam she should have an abortion, which she is reluctant to do. Her story and Hamids are told at the same time, interweaving, though seperated by time and space.

Hamid is still travelling when he comes across an Israeli soldier. He doesn’t know what to do with him, worrying that a patrol will come along. He tries to speak to him but, of course, the man does not speak Arabic and Hamid does not speak Hebrew. As Dayal notes:

Unavoidably, they find that they are locked in a struggle. The only resolution to this symbolic impasse is violent death. The fateful convergence of Hamid’s life and the soldier’s is calculated, of course, to evoke the larger political resonance, that is to say the historical emnity between the Palestinians and the Israelis.

Edward Said in the foreword to Elias Khoury’s Little Mountain, compares Ghassan Kanadani’s novels Men in the Sun and All That’s Left to You usefully in terms of the disintegration of form:

Men in the Sun, Kanafani’s story of Palestinian loss and death is undermined as a narrative by the novel’s peculiarly disintegrating prose, in which within a group of two or three sentences time and place are in so relentlessly constant a state of flux that the reader is never absolutely certain where and when the story is taking place.

In What is Left for You, this technique is even more pronounced, so that even in one short paragraph multiple narrators speak without, so far as the reader is concerned, adequate markers, distinctions…and yet so definitely pronounced is the unhappy fate of the Palestinian characters depicted by Kanafani that a kind of aesthetic clarification, by which story, character and fate come jarringly together, occurs in their terrible encounter with it. In the earlier work the three refugees are asphyxiated in a tanker-truck on the Iraqi-Kuwaiti border, in the later novel Mariam stabs her abusive and bigamous husband while her brother Hamid faces an Israeli in a mortal encounter.

I was watching a lecture by Saree Makdisi on Excavating Memory in Jerusalem a while back and he was asked about the role of literature in the Palestine/Israel context during the Q&A. He gave Ghassan Kanafani as an example of how literature means thinking in more complex ways about the other, citing Returning to Haifa, which he interprets as sympathetic to “the other narrative.”