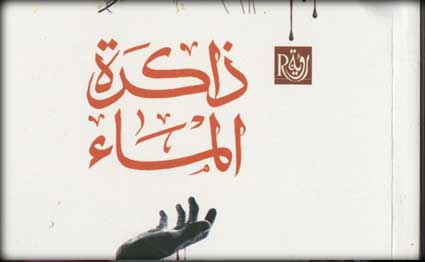 Just finished reading Waciny Laredj‘s Memory of Water (1997),  the story of a leftist intellectual in Algeria, who narrates the fragmentation of his country in fragmented, stream of consciousness prose. Set in the early 90s, many of the chapters begin with newspaper clippings the narrator has collected, dating all the way back to the 60s, yellowed accounts of large and small incidents the narrator sees as atrocities, from the assassinations of Algerian intellectuals and Jean Sénac to the institution of the call to prayer on TV and other examples of a flimsy religious rhetoric espoused by the regime to combat fundamentalists.

The novel begins with his wife and son having left for Paris while he remains with his daughter, Rima. They go to visit them and then come back, the narrator describing himself as unable to leave Algeria,although Mariam his wife asks him to stay in France, saying she wants him alive, and “not a black and white picture in an old frame.”

In Paris, they go to visit a café  appropriately called Le depart, and the frame widens to a regional one as the narrator remembers “friends who were lost in this country and in others, Iraqis eaten away by exile, Palestinians who ran after a country for a long time and every time they got closer to it, it got further away and shrank, Yemenies and Gulf Arabs, who shook off dead traditions, but whose cries remained unheard.”

He realises that he doesn’t want to be one of the exiled, as Algerian exiles come to visit and pepper him with questions about the old country: “They ask and they don’t wait for answers, their exile grows and the distance between them and the country widens and memory tires and forgets.”

So he returns but finds himself growing increasingly paranoid about being targeted, having received threatening messages during the course of the last two years. The way the novel moves from death to death as the narrator recounts the death of his friends reminds me of Yasmina Saleh’s A County of Glass.

There is a sense of an inexorable downward spiral, with the narrator and his family helpless and caught up in it. As the narrator puts it, “What’s terrifying is that our own will to live is no longer great.” After one of the many funerals he attends in the course of the novel, his young daughter asks him, why is only men who pray the funeral prayer over the dead? He laughs and answers, “because our women love life more than the men.”

Much of the novel is in your face in that way, representing political crisis in set-pieces of anger and humiliation, giving characters opportunity to vent. Early on in the novel for example, the narrator and Mariam go to attend a lecture with the title The Arab between Rights and Duties, on the occasion of the international day for human rights, and Mariam says, “Come on then, lets see whats happening to this poor ape they call the Arab.”

Case in point, she finds that one of those attending  the lecture is a man who worked in a prison she used to visit, a man who used to be a leftist, who spent time in prison and turned against his comrades, turning them in and became their torturer. Cue Mariam’s soliloquy on hypocrisy:

Strange is the creature of this country. He prays the dawn prayer, he fornicates at noon, he steals in the evening, and at night he asks God’s forgiveness…he doesn’t ever feel shame, he walks with two people inside him…between them a transparent glass that doesn’t break (my translation).

In another set-piece of allegorizing tragedy, the narrator describes the destruction of a statue by the fundamentalists, where not even the dove he had hoped would be saved is spared, a scene which ends with him musing “People forgot there was once a lady of marble, on whom the sun’s rays broke every morning and evening, a lady who did not bathe except in the pure rain and who never held anything but a small dove, daily preparing to fly, which did not fly, until it was brought down to earth and shattered.”

At the end of the novel, the narrator is imagining knocks on the door. The last words on the page are where the text was written, “Algiers – Paris (and other cities)”, a reminder that this is a semi-autobiographical account, a hint that exile is inevitable.

Laredj was longlisted for IPAF in 2011 for The Andalusian House, and again this year for Lolita’s Fingers. ArabLit has a profile of him here and Al Ahram here, if you excuse the “Arab Poker” for Arab Booker.